If you read any of the guff I write you will probably have heard me mention Charles Dowding before. He's a bit of a hero of mine basically because his book 'Organic Gardening - The Natural No Dig Way' made so much sense to me when I first started growing. Charles is all about the soil and in particular adding annual dressings of compost and manure to build a very fertile vegetable garden. He is also, as the title of his book suggests, a champion of the No Dig philosophy where digging is kept to a minimum and the crucial structure of the soil intact. When you read Charles's books the overwhelming impression you get is of good common sense and a profound respect for natures cycles, he improves the soil he works with rather than depletes it and produces vegetables bursting with nutrients and flavour. I figured I had better go and meet him.

Despite carefully planning my drive to Somerset the next day I managed to loose a large chunk of time just getting out of Birmingham (getting out of the hotel had been difficult enough), I made a complete bags of it near Bristol followed by a nearly loosing my reason in Shepton Mallet and arrived at 'Homeacres', Charles Dowdings new garden unforgivably late. Charles was charm personified however and after a glass of homemade elder flower cordial we strolled into his garden. 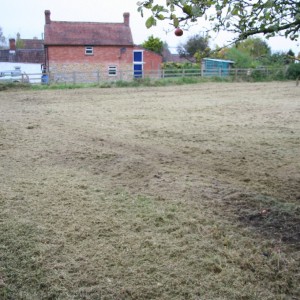 You would be forgiven for thinking the garden at 'Homeacres' had been in existence for over 40 years, the neat rows packed with perfect produce hinting at a rich garden soil nurtured over time.  Not the case as you see in the picture. Only 6 months before my visit this was a pretty average bit of grassland full of weeds and field grass completely unaware of its potential as one of the countries most impressive vegetable gardens. "How on Earth did you do that?" I blurted (I was still a little unhinged for the night before), I couldn't believe the transformation in such as short space of time. More incredible still he didn't dig any of it over but spread layers of compost and manure directly over the grass. As Charles says at the end of one of his books: "It really is all about the soil", his ethos being all about improving the fertility or the soil in order to properly feed the fruit and vegetables he grows. Charles reckons he added about 30 tonnes of manure and compost to his garden to get it to the level of fertility he requires. He is quick to point out however that these amounts were only needed to start the garden and aren't needed every year. He also has a large site where he produces commercial crops and runs his courses so don't get a fright, you won't need that much! 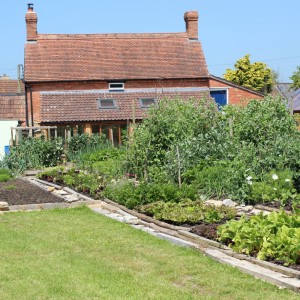 His advice is simple: 'disturb your soil as little as possible', add nutrients like compost and manure to the surface rather than digging it in. Charles points out that digging disrupts the many beneficial bacteria, fungi, worms etc... which actually benefit your plants. By experimenting with dug and undug beds he has shown that Spring vegetables are slower in the dug beds as the soil recovers from seasonal digging but Autumn crops show less difference as the soil has had time to recover. "But surely you have more of a problem with weeds if you don't dig?" I stupidly add (The garden at 'Homeacres' is immaculate, and I mean not a single weed in sight). Not the case, Charles informs me and goes on to explain how to keep on top these unwelcome guests. 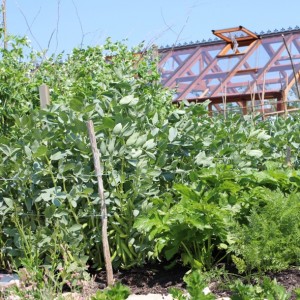 Digging soil causes problems from the beginning as dormant weed seeds are brought to the surface where they germinate. The 'No Dig' approach is to add compost to the surface of the soil and this also has the added benefit of helping suppress the weeds underneath. The layers of compost on undug soil also help prevent weeds growing by excluding light. I had always thought 'No Dig' meant keeping mulches topped up through the season to stop weeds and this put me off a bit because I didn't like the idea of grass clippings etc... spoiling the look of my vegetable rows and wasn't entirely convinced it would work. I'm therefore delighted to hear from Charles that he applies a heavy mulch in the Autumn and/or Spring and pretty much leaves it at that for the rest of the year. Constant mulching builds an excellent habitat for slugs which of course we're all trying to avoid so leaving the surface of the soil clear makes more sense. Charles tells me other wonderful things about spreading compost on top rather than digging in but if I went into detail I'd be writing a book of my own so here's the rest in bullet points: 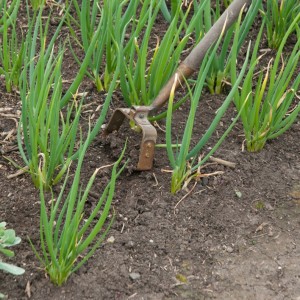 Anyway, I persist, but what about the weeds? It turns out Charles is a bit fanatical about weeds and gets quite excited as he tells me how it's all about being meticulous about keeping the surface of the soil weed free. He seeks out the smallest weed and removes it before it has the chance to properly root and, more importantly, produce seeds and more versions of itself. This might sound time consuming but in fact by employing the 'little and often' adage it takes no time at all. The crumbly texture of the soil means it's really easy to remove weed seedlings either by hoeing on a dry day or pulling weeds by hand as they come up. The whole point is that if you do it often enough there won't be many weeds to pull so forget the idea of crawling about on your hands and knees for hours, that's not going to happen. I love this extract from 'Charles Dowding's Vegetable Course': "I have seen gardeners spending huge amounts of time and money clearing gardens and allotments, achieving a lovely clean soil, and then demonstrating a seeming aversion to pulling a few, only a few, weeds, which then drop thousands of seeds. They could have avoided the resulting explosion of weed seedlings so easily by taking just a few minutes to pull their parents". 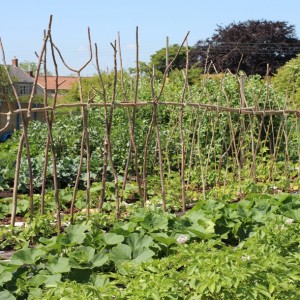 Charles also makes the point that permanently weed free highly fertile soil is always ready to sow into. Lift one crop and you are ready to sow another immediately. Forget the task of clearing the ground in Spring, if you follow a good compost and weeding regime you'll never have to do it again. Look, I could go on for days about all this. I spent the morning with Charles at 'Homeacres' but could easily have spent a week, it was fascinating, encouraging and uplifting. Why? Because after years of trial and error and meticulous attention to detail Charles shows it is all really very simple. I had a bit of an epiphany standing there in the bright Somerset sunshine, it just all suddenly made perfect sense. Charles has written a number of books including 'Salads for all seasons', 'Organic Gardening', 'Winter vegetables' and my personal favourite, 'The Vegetable Course Book'.He also runs seasonal courses from his Somerset garden which can be accesed through his website www.charlesdowding.co.uk. We stock 'Organic Gardening' and 'The Vegetable Course' on the quickcrop shop which can be accessed by clicking the links.