As you can see from the image above our seed potatoes for this year have now arrived and are looking forward to going out to their new homes. We have the usual broad selection of varieties with the inclusion of a few new ones including Sarpo Una, Shona and Blue Danube from the excellent 'Sarpo' range of blight resistant seed potatoes.

I think I mentioned it before Christmas but potato harvests were poor last year leading to a shortage of some varieties. We were able to source all we wanted but we are not so sure of follow on supply so I would recommend ordering early so you can choose from the full selection.

Tips on 'chitting' potatoes First and Second early varieties will benefit from sprouting or 'chtting' to achieve an earlier harvest. There is also some evidence to suggest that chitting produces a slightly higher yield but as I chit them every year I can't verify this.

Chitting basically means placing the potatoes in a cool and bright frost free space. You don't want it to be too warm or the shoots will be long and weak, 10 degrees C is about right. If you are doing small amounts you can place the seed potatoes in egg boxes but if you are chitting larger numbers a crate with a slatted bottom is ideal. You can see my potatoes from last year above happily sprouting away in the polytunnel, I think this was taken in February and shows nice stubby sprouts.

Whether you are using egg boxes or crates place the potatoes with the end with the most eyes (little indents with buds in them) facing upwards. 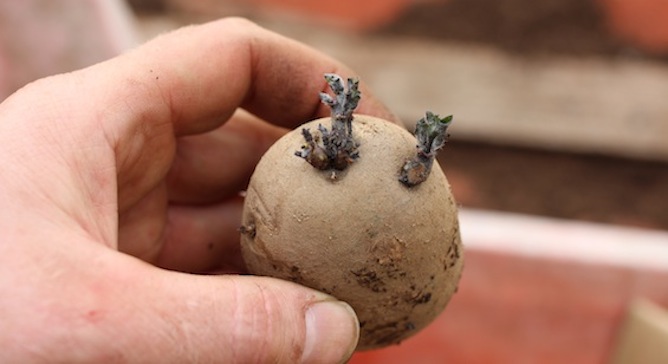 Stubby Sprouts The reason we chit the potatoes in a cool bright place is we want compact sprouts to form which will survive being planted and not snap off. What you don't want is long white sprouts (you will be familiar with them from stray potatoes in the back of the kitchen cupboard) that have grown too quickly and will be weak and brittle.

Larger potatoes Potatoes that have a large number of shoots will produce smaller potatoes (though not necessarily a smaller overall yield) so if you prefer larger spuds you can rub away excess sprouts to leave three or four just before planting out. 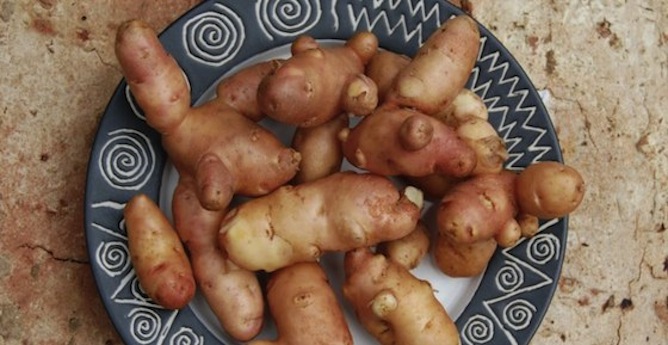 Heritage varieties like the wonderfully nutty 'Pink Fir Apple' (above) are very prone to blight but if you want to grow them without spraying they will benefit from chitting and planting early. You you can expect to get a decent harvest in August or early September before the worst of the blight hits. 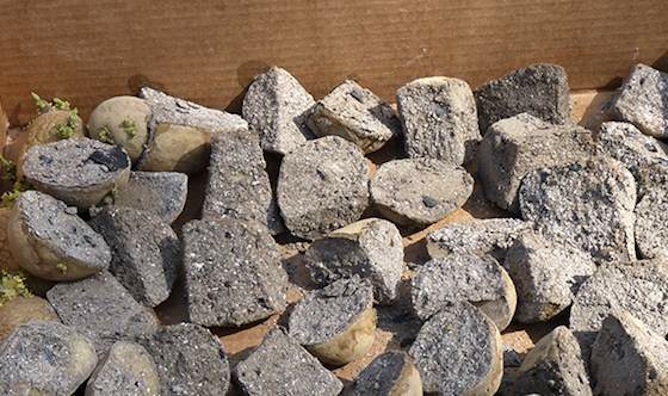 Cutting large potatoes and dipping in wood ash You can get more potato plants from a bag of seed potatoes by cutting large tubers in half and planting both halves. Cutting the potatoes length ways instead of across will give a better yield as there are more sprouts on one end than the other. Make sure each piece has at least 3 sprouts on it.

It is best to cut your potatoes 2 weeks before planting and leaving time for the wound to heal. Dipping the cut surfaces in wood ash will help provide a protective barrier and reduce the chances of rot when they are planted out.

First Earlies, Second Earlies and Maincrop potatoes The categories seed potatoes fall into are related to how many weeks they take to mature. I have included the three main categories below and a little information as well as links to the potatoes themselves.

First earlies – Time from planting till harvest: 90 days. Plant mid March. Harvest late June/July Early potatoes, as the name suggests, are the earliest to mature. Early potatoes are generally dug and eaten fresh from the ground while maincrop varieties are grown for storage over the Winter. Early potatoes have a lower yield than maincrop and are generally smaller potatoes but they have a different (and delicious) character and flavour so are well worth growing. Earlies also have an advantage over maincrop as they are harvested before potato blight becomes a problem in July/August so can be grown without using any blight control.

Second earlies – Time from planting till harvest: 110 days. Plant early April. Harvest July Second earlies take a few weeks longer to mature than first earlies. Some varieties like the excellent 'Orla' can be grown as second earlies or left in the ground to mature and grown as maincrops depending on your preference. It is important to sprout or 'chit' both first and second early varieties to give them a head start and ensure early harvest times. Chitting means arranging your seed potatoes in a cool, bright and frost free place to allow them to sprout.

Maincrop – Time from planting till harvest: 135 days. Plant mid to late April. Harvest October onwards. Maincrop varieties are the ones you grow for storage over the Winter and should provide you with a supply of potatoes into the Spring of the following year.

There are an infinite number of potato varieties available, we stock a pretty wide selection but they still remain a carefully chosen list. We make our choices from first hand experience growing the crops or from recommendations from growers we know. I have included a small selection of what is available below including some of the more unusual varieties to give you a flavour of this fun and easy to grow crop.