Well, it's been a while. I always have great intentions to write more articles every month but time seems to slip by so easily with the day to day business at Quickcrop. Yes, I am the same person who sends you weekly mails on fascinating seasonal products but I do prefer to give a mix of products and information, that's sort of the deal isn't it? I do have a bit of an excuse though. I get monthly gardening newsletters myself and must admit I always cringe a bit reading the Winter ones, don't you? I mean, there isn't much to do outside, it's wet and cold and there's nothing growing.

Apart the usual advice like cleaning the inside your polytunnel or greenhouse I think the best one I read has to be 'clean the blades of shovels and spades and rub with burnt engine oil to protect'. Even if you had reached the point where standing in a cold shed rubbing a spade was your only option where do you get burnt engine oil? Unless you've just serviced your Austin 7 or De Dion Bouton you might yourself in a bit of a spot. But enough of that, we're nearly in March now and there's plenty you can do so here's my seasonal list: 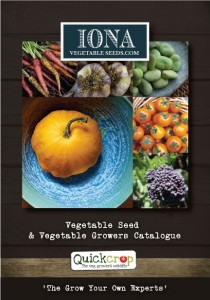 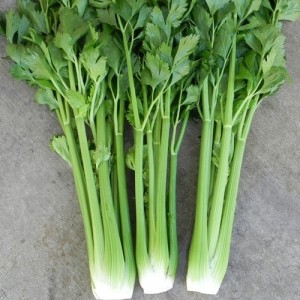 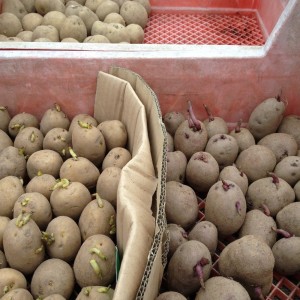 Get going with early potatoes Early potatoes will have to go in a little earlier this year as there is a problem with seed stocks coming out of dormancy too early as a result of a mild Autumn and Winter. Stocks are also very low everywhere so we advise ordering as soon as possible as we can't be certain of getting more. If you haven't done so already get them chitting (sprouting) by leaving them on a bright windowsill or in the tunnel or greenhouse. Chitting isn't really necessary with maincrop potatoes but very helpful with earlies to bring your harvest date forward. 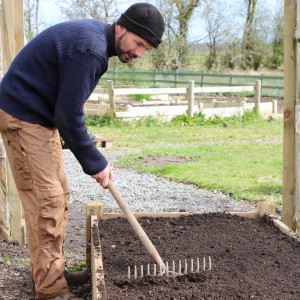 Preparing Your Soil The weather has been so wet it's best to avoid walking on or cultivating your soil as you can do more harm than good. Digging wet soil (especially heavy clay soil) causes compaction and leads to poor aeration and drainage. If your soil is light or has dried out sufficiently later in the month you can start removing any weeds before your sow. The 'stale seed bed' technique involves hoeing a few weeks before you sow and letting any weed seeds germinate. Hoe any weeds which come up the second time and give it a final flick before you sow. This method is particularly well suited to carrots or other crops which are poor competitors with weeds. If your soil needs a good feed it's not too late. As always I recommend a natural compost especially at this time of year, as it's fully composted so can be worked in and planted straight away. If you haven't fed your soil in the Autumn add a 2 inch layer to the surface of your beds and gently mix with the first few inches of soil.