I don't think I ever showed you my garden did I? It was originally put together as the shared Quickcrop garden but since the business moved from my house this Spring (it used to be housed in my barn and cow shed) it became a solo affair. It was a funny thing that when it was known as 'the Quickcrop garden' I had no interest in it but now that it's up to me to make sure it produces healthy crops and looks good for photos and videos etc... I feel much more bonded with it. Of course this year, my first year in full control, I got away with murder. The improvements we had made over the last few years in the soil began to properly bear fruit coupled with a fantastic Summer made it look like I'd suddenly sprouted the greenest of fingers.

If you read my piece in the Spring about improving the soil you will know I converted to 'no dig' after I met Charles Dowding and stopped thinking Jane Powers was mad (well, I still do but agree with he 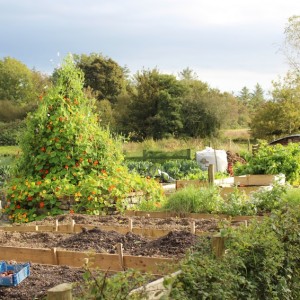 r on 'no dig'). I can't show any benefits of the system yet as I had to re arrange my garden to fit the limited time I could give it. This meant giving it the biggest dig it's ever had and convert it all into raised beds. It is all in simple beds and paths now, there are a lot of straight lines and neat rows and with my graphic designers yearning for order I absolutely love it. What I'm doing now I'm clearing out anything that's spent including digging all my potatoes. I lifted them all and let them dry in crates in a cool shed for a 10 days (cover to keep light out) before storing them in hessian potato sacks raised off the ground on pallets. Don't wash your potatoes as this will reduce their storage life, just give them a quick rub to remove the majority of the muck. As regards the potatoes I grew We had the following: Red Duke of York, Setanta, Sarpo Mira, Pink Fir Apple, Shetland Black and Salad Blue. 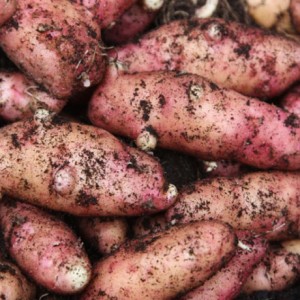 I'll always recommend Setanta as it's a delicious potato with good blight resistance but I was surprised at how good the Sarpo Mira was this year. I always grow Sarpo Mira and find it a brilliant backbone in a bad blight year but was never too excited about the flavour. This year they are really good which I'd put down to the drier weather, I have found the same goes for 'Orla' which can also be disappointing in a wet year. A big success? Pink fir apple (photo). These are absolutely delicious spuds with a surprisingly good yield. Yes blight will be a problem, you will most likely need to spray with bordeaux mixture, but what a fantastic heirloom potato and one I'd highly recommend. They are a salad type potato with a creamy flesh and characteristic 'nutty' flavour. They hold together very well when boiled and give you a fresher early potato taste later in the year. Really good in for use in casseroles of vegetable curries. 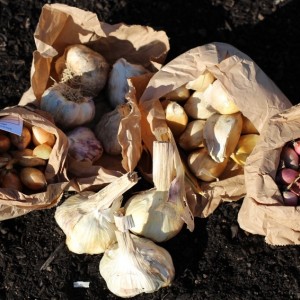 Planting Garlic I didn't plant garlic last year as I knew I'd be changing the layout of the garden over the winter and wouldn't be able to leave them where they were. I'm making up for lost time this Autumn by planting a broad range of bulbs. As I'm sure you know Autumn is the time to get your garlic in and October is just about perfect. Get them in while there's still a bit of warmth in the soil to get the roots going. I've written a short article on garlic including video here but if you want the quick heads up please see the following points: As you probably know we have a large range of garlic bulbs available many of which are Irish grown. I would have to say, by the way, we found the quality of bulbs supplied by our two Irish growers exceptional in comparison to imported stock from years past. The garlic varieties we stock are as follows: Vallelado, Provence, Iberian, Lautrec, Tuscany, Solent, Early Purple and elephant garlic. 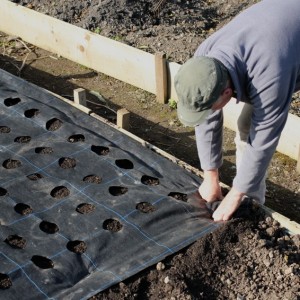 Planting Onions Overwintering onions can go in now though we are cutting it a little fine as traditionally they should have been in by the second week in October. It is unseasonally warm however so if you ask me it's worth a go. Of course if you're planting in a polytunnel now is about perfect. I had a great success with onions this year using the growgrid system as designed by Eoin Flaherty from the Aran Islands which I used again for my Autumn crop. I'll be honest, I thought this was a bit of a gimmick when I first saw it but then I grew fantastic onions which I hadn't had to weed. You can see in the photo how it worked for me with the onions filling the planting hole and keeping out weeds. If you're like me and love your garden but sometimes can't afford all the time you like these mats are the business. As you can see in the top photo I'm re-using the same mat from this years crops which 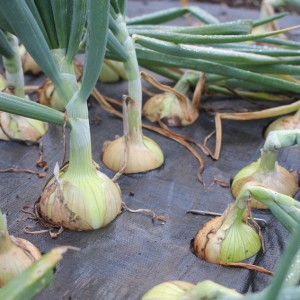 didn't rip or unravel around the holes thanks to Eoin's ingenious system. I'm using mat 'D' which has a spacing of about 15cm which is perfect for onions and comes 2 different sizes: 1.5m x 4m and 1.5m by 2m. You can view our 'Grow Grid' weed control planting mats here. As regards which onions to plant in the Autumn they are Japanese types which will give you an early crop of onions the following year. We stock 'Senshyu Yellow', 'Shakespeare' (was he Japanese?) and 'Red Winter'. Here's the 1.2.3. on planting onions: 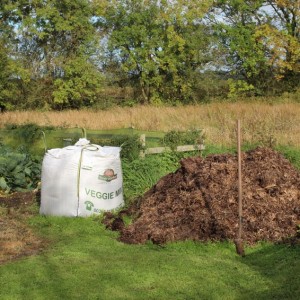 Improving my soil You must be sick of me banging on about my soil but I'm determined to get it right. Usually I add well rotted manure and Envirogrind to my garden in early Spring as I figured the winter rains would wash the nutrients out of the soil if I did it in Autumn. Charles Dowding disagrees as he points out the nutrients in compost and manure are insoluble so will remain until they are needed the next year. Of course the other advantage is if your manure is a bit 'juicy' it can have time to rot down a bit more before it's needed in the Spring. I'm spreading the compost on top of the soil rather than digging it in, I'll let the worms do that part for me. The idea is that digging manure into the soil breaks up the beneficial mychorrizal fungi which help make more nutrients available to the roots so you're better off leaving them alone. 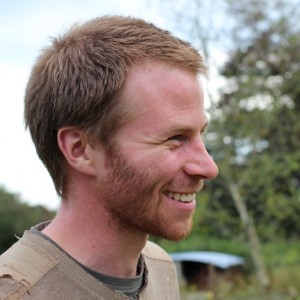 I'm spoiled obviously as not only can I easily get my hands on Envirogrind I also have my friend farmer Clive (picture) down the road. Clive is an organic farmer and painter who kindly drops me a large load of very well composted cow manure every year in return for, um, some seeds and a bit of grass (silage, not the other stuff). My plan this year is to spread Envirogrind at a rate of a bucket per square meter, cover with a layer of Clive's manure and then top the whole lot off with seaweed. You might think this is a bit of overkill but my reasoning is thus: I know I may be gardening on a larger scale than some of you but don't forget you can, and should, do pretty much the same thing with your raised beds. 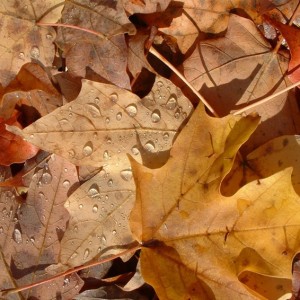 That's it for now! Don't forget to collect all those Autumn leaves, they'll be very handy for making up the carbon part of your compost heap next year. Leaves are good source of minerals as most trees are deep rooted and draw up minerals from the soil with a good proportion deposited in the leaves. It's handy to chop them up in the lawnmower first as you'll fit more in your bag or pile and they'll break down quicker in the compost. Have an enjoyable Autumn, it's beautiful out there no matter what the time of year. Get in touch if you need any help or advice, we're always on the other end of the phone. Andrew, Niall, Leon, John, John Og, & Annette. www.Quickcrop.co.uk