I am afraid we have had to close the Quickcrop site for 3 days and not taking any new orders until Friday. As I think I explained last week we are down to a small team of core staff who are doing all the packing and we are struggling to keep up. Rather than get ourselves in hot water with increased delays we have decided to close our checkout from this morning, Tuesday the 31srt of March until this Friday the 3rd of April. We will still be packing and shipping existing orders but hopefully this will give is a bit of breathing space and allow us to catch up. Naturally I extend my apologies for any inconvenience. 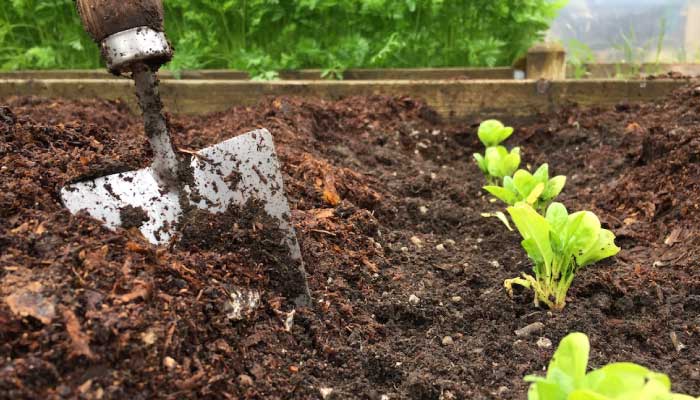 We remain on the official list of businesses that are permitted to stay open under 3 different headings; garden supplies, home and hardware and food production. We can assure you that we run a very strict hygiene regime both for our staff internally (at work and at home) and when we need to interact with outside delivery personnel. We remain confident that we can continue to supply when we re-open on Friday. 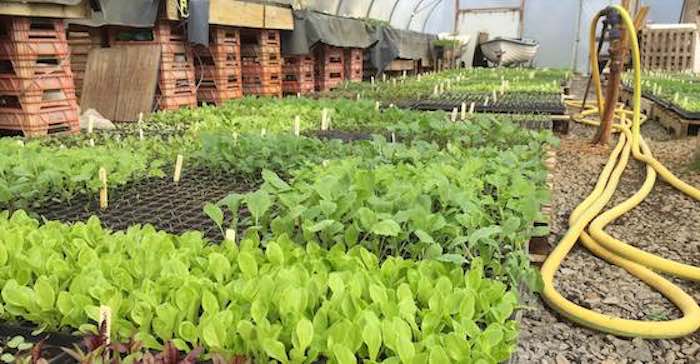 Vegetable Seeds and Seedlings We have had to delay the re-introduction of vegetable seedlings but they will be back up on the site this Friday the 3rd of April. I am letting you guys know first, please make sure you order in the morning as we expect plants to sell out again in no time due the the number of enquiries we have been getting. Despite an unsure future we have taken the decision to re-sow the full nursery so if you miss plants in this round we should able to sort you out in the next batch in 3 weeks time provided we are still permitted to ship. Seeds packs will also be back up on Friday as will most items that have been marked out of stock for the last couple of weeks. As I said, we should have the warehouse re-stocked and ready to go again. 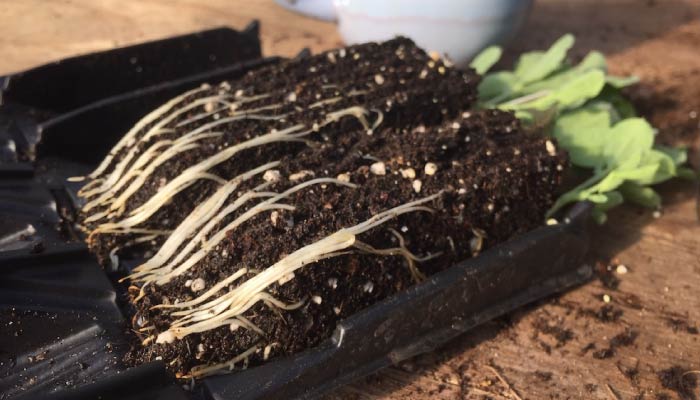 Garden Update I got quite a bit done on Sunday as it goes with some fresh seed sown, some potting on and some pretty extensive tree pruning. The photo above shows my final batch of sweet pea seedlings which I potted on to larger pots before finally planting outside towards the end of April. I include the photo to show what a nice job 'rootrainers' make of preventing roots coiling around the inside of the seedlings cell. I use this product for any peas and beans as they have vigourous, fast growing root systems that can quickly become pot bound. The problem with plant roots coiling around the inside of a cell or pot is they tend to continue in this habit when planted out which restrict plant growth (the roots don't spread out into fertile soil but draw their nutrients from a limited area). The broad beans my daughter planted last week were also started in rootrainer modules and are coming on in their new homes beautifully. 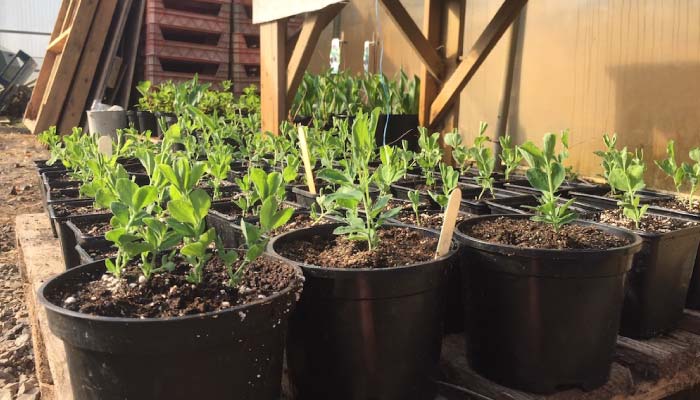 I will be letting the sweet peas (above) settle in for a couple of days and then pinch out the growing tips (once they get around 10-12cm high) which is done to encourage more bushy growth. The reason the pots are placed on an old shipping pallet, by the way, is to keep them off the cold floor of the polytunnel. 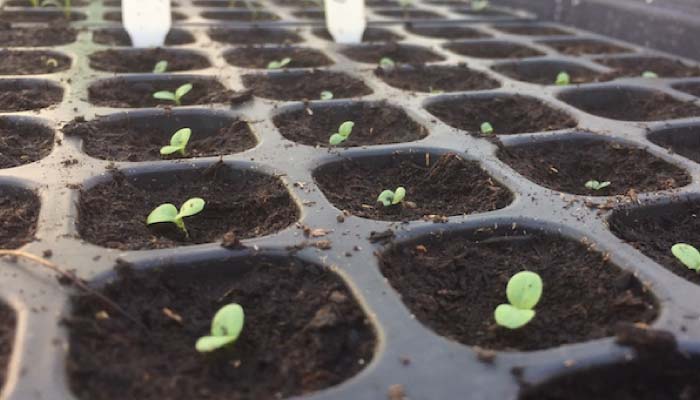 Sowing seeds Pictured above you can see two lettuce varieties having just popped out of their seed shells, these are 'Catalonga Cerbaitta' and 'Little Gem'. I mention them for the benefit of novice growers to point out that lettuce germinates much better if you don't cover the seeds with compost. Like celery, lettuce seeds need light to germinate. You can just about see in the photo (the cell one back from the front on the left shows it best) that I sow the seed in a small depression made in the compost with my finger and don't place any compost on top. The compost needs to be kept moist obviously for the seed to germinate; the depression also helps in this regard by creating a little well and keeping the seed in place. I often get questions about poor germination of lettuce and this is usually the problem, you can see in the photo we have a 100% hit rate. 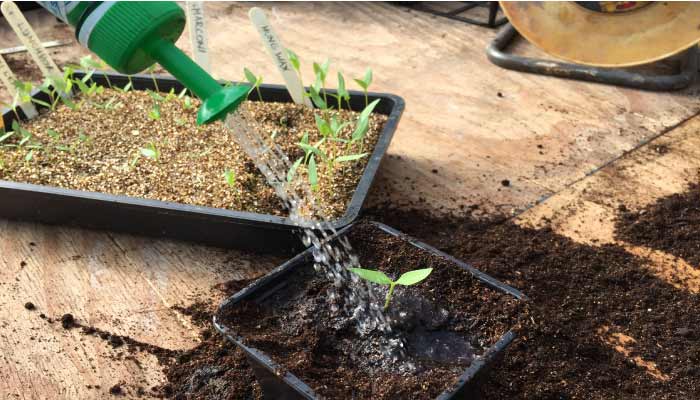 Speaking of watering Another good tip for beginners is to keep your seedlings a little on the dry side. Far more plants are killed by over rather than under watering, especially with novice growers as it is tempting to fuss over the young plants. Keeping your compost 'just moist' has two distinct advantages; you are less likely to get damping off disease (a fungal disease that effects seedling stems) and you will build a better root system. Plants that are spoiled will grow shallow roots as the top layers of compost are always moist, plants grown in drier compost will have deeper roots as the roots grow down in search of moisture. Of course, you should not let your compost dry out, it's a balancing act. If the surface appears dry, poke your finger in to test and only water if there is no moisture further down. As a rule of thumb, if the compost sticks to your finger there is moisture present. 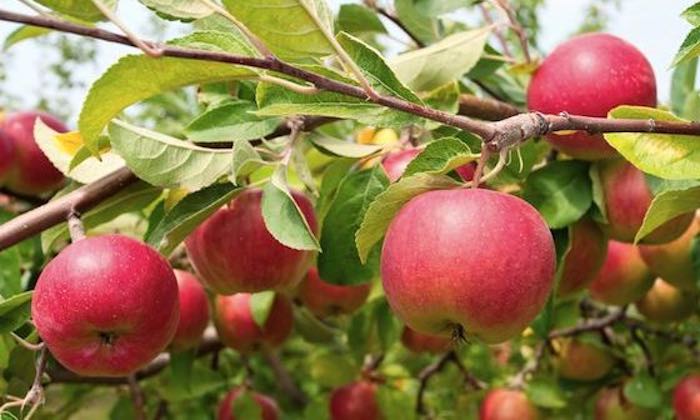 Pruning Apple Trees To be fair this is an impossible subject to cover in a couple of paragraphs but here goes. As my 3 year old apple trees were about to burst into leaf it was my last chance on Sunday to prune them. Young trees need formative pruning to create a good fruiting and harvesting shape, I should have done mine last year but missed my slot. There's a load of stuff to learn on this (I will confess I am far from an expert) but for now let's looks at shape. Fruit needs sunlight to ripen, therefore when shaping a fruit tree we want to allow sunlight in to all the branches so it can ripen as much fruit as possible. You know the old adage 'the best fruit is always at the top of the tree'? That's true because the fruit at the top gets the most sun. There are two common shapes, a tiered option where the branches are progressively smaller as they go up, or a goblet shape with an open centre. I prefer the goblet as they are easier to harvest and more air gets through the tree, an advantage in a damp environment. 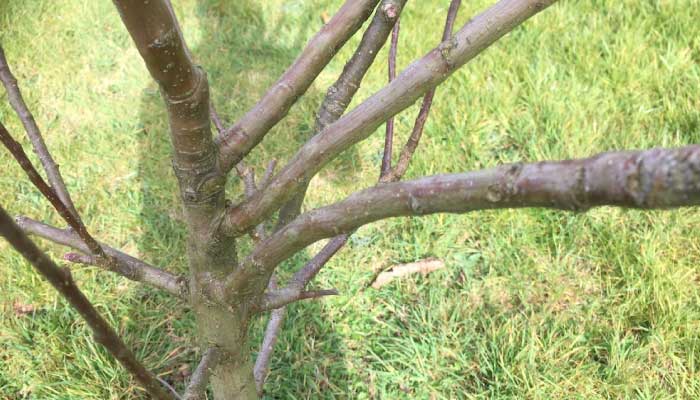 My apple above is a good example of a congested young tree with branches growing all over the place. You can see on the right hand side of the main trunk there are three branches directly on top of each other. We don't want this as the branch, or branches, above will shade the fruit below and prevent it from ripening. The shape we are looking for is like a wheel with lateral branches protruding evenly from the central trunk. View each branch as a fruit tree in itself and ask is it in an optimum position or is it being shaded by a neighbouring branch? 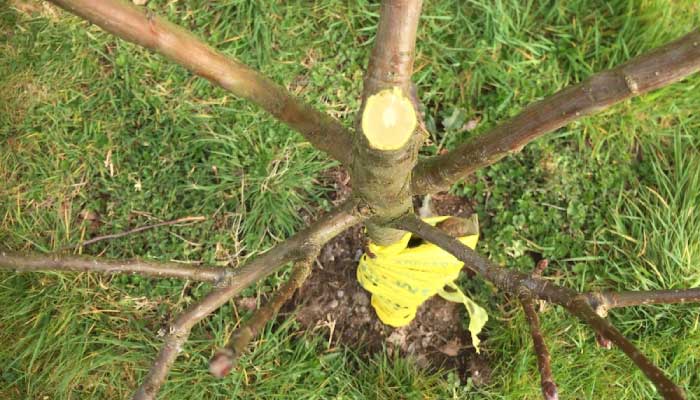 Here is the same tree after pruning. I have taken out the leader (vertical branch in centre) and the branch below. I have also removed any branches below my main 5 branches that were growing up into the ones above. You can't see it in the picture but the cut is at an angle to encourage water to run off it. This tree is only 4ft tall now but I can picture it at it's mature size still built around the basic framework I have created with 2 or three cuts. 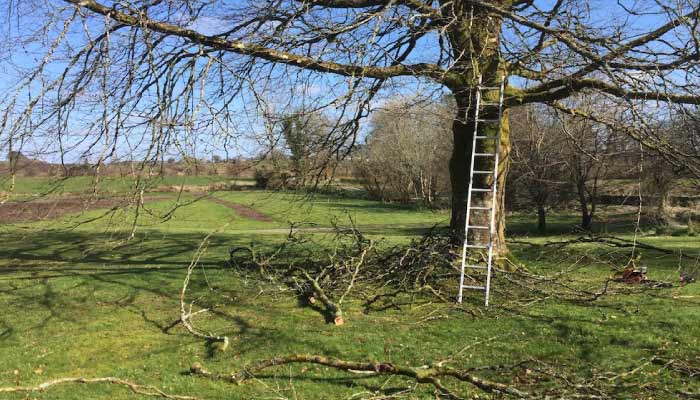 Of course, I then got completely carried away and started pruning trees all over the place. I performed severe surgery on some old apple trees which I won't show you as it was a bit of an experiment and way above my pay grade. If it works I'll report a stunning success, if not you won't hear about it again. Anyway, the image above is a copper beech which, while beautiful, is like someone parked an enormous dark purple car ferry in front of our house when it's in leaf. I raised the canopy a little 15 years ago but now I want to take out a little more so I can see through to the garden beyond. The thing with any mature tree pruning is not to cut branches half way up and create a stunted, mini version of the orignal tree. This is called topping and results in a mass of crazy growth from the top of the cut and leaves (excuse the pun) you with something looking like an old shaving brush. Unfortunately, as this is usually done to 'let in more light' it actually has the opposite effect and results in dense, heavy growth that eventually makes things much worse. Drive around suburbia and you see these butchered specimens all over the place, often done by a 'landscaper' (some fella with a van). 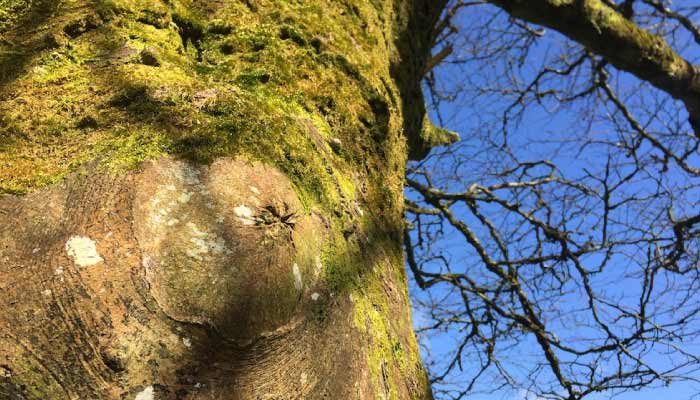 If you're going to remove a branch from a mature tree you should remove the whole thing if possible. When removing a branch cut close to the trunk or limb the branch emanates from; leave an inch or so (known as the collar) proud as this is where the tree begins it's healing from. The photo above shows one of the cuts I made 15 years ago which has (as did all the cuts I made, I am proud to say) completely healed over and is covered with a layer of bark. I hope the tree will now forgive me the couple of new alterations I made at the weekend. BTW, I had a complaint last week from someone who felt my emails were too long, they won't like this one then! Here's a tip for anyone in the same position: stop reading. That's about it for this week, stay safe, stay well and stay happy! Andrew