I spent most of last weekend loafing around Kent and Sussex as I was keen to visit a few gardens while the season still has some life left in it. One of the highlights of the trip was a visit to the Knepp Wildland in Sussex, a project that has seen much of the 3,500 acre Knepp estate revert from commercial farm back to natural habitat. Dairy farming and tillage has been replaced with scrub, woodland and pasture which is now home to free roaming deer, Tamworth pigs and old English longhorn cattle.

Having quite a scruffy garden myself I figured I was ahead of the curve on this one and was expecting to offer some tips on letting your garden get out of hand when I got there. My garden is only 2 acres in comparison to their 3,500 so I guess I won't be introducing any deer but the same principles apply, albeit to smaller scale livestock. 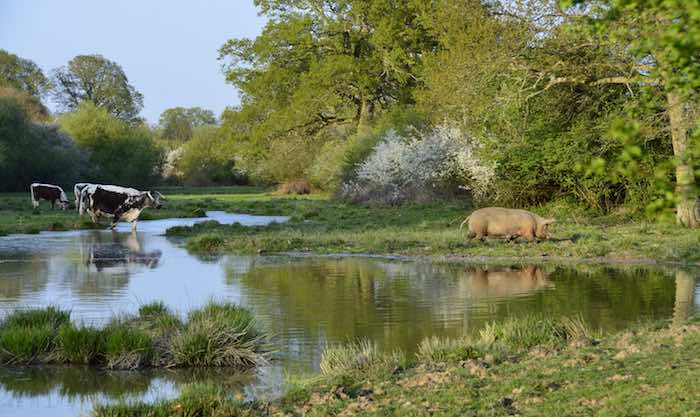 My initial reaction, as I began a walk around one of the estate's trails, was to wonder what all the fuss was about. The fields, which were dairy pastures only 16 years ago, are in the process of reverting back to woodland and contain clumps or willow, weeds and wildflowers. The hedgerows are unkept and have grown tall and unruly with every gap clogged by an impenetrable, thorny weave of brambles. I was beginning to feel quite at home.

Myself and my pal Steve were keeping our eyes peeled for wildlife (as we helped ourselves to the blackberries) and were soon rewarded by the sight of a pair of antlers mowing around in a nearby thicket. As we focused in on the spot various heads and tails also appeared until a whole herd of deer emerged. 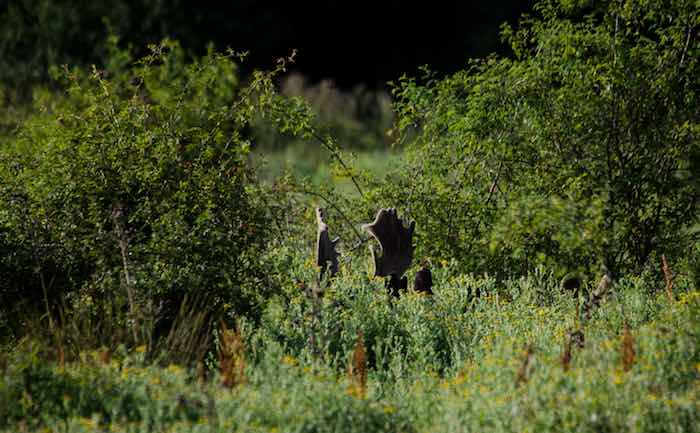 Don't get me wrong, I like deer as much as the next man, but I was still not that impressed. You can see deer in city parks (remember the Youtube video of Fenton the dog chasing them in Richmond park?) so other than the wild looking habitat there was nothing new there.

But then we heard a mew from above and saw a pair of buzzards (I think) circling for prey. Somehow their calls transformed the scene into something eerie and pre-historic, the deer then took on a new significance. 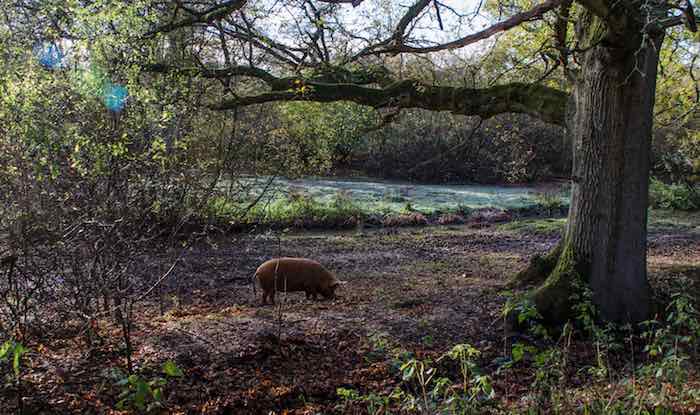 About 5 minutes later we came across a group of Tamworth piglets rooting around in the undergrowth. The fact that we never saw the mother (though I presumne she was close by) or any form of housing or fencing to keep them in again made the scene a little surreal.

After that the whole thing became like a safari as we walked through open areas, woods and wetlands and saw quite extraordinary amounts of wildlife. It really did feel like we were being a allowed a glimpse into the past when much of our landscape looked this way. 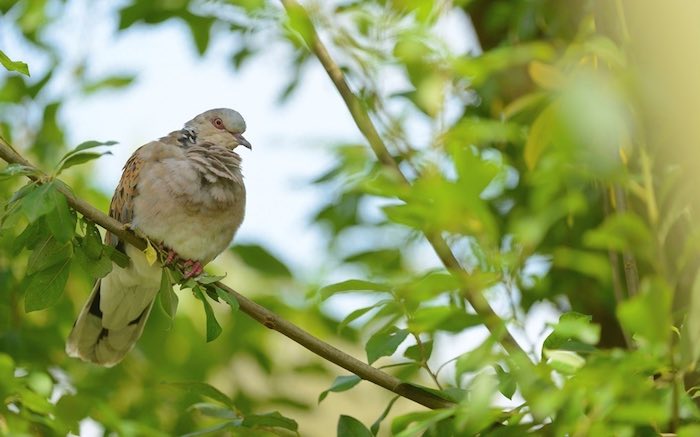 The concept behind Knepp is a simple one; leave it alone and see what happens. Yes, deer, pigs and longhorn cattle have been introduced but these are required to temper the spread of trees and scrub. Without grazing herbivores the land would revert to close canopy woodland which would not provide such a variety of habitats.

The estate has also revived ancient wetlands by removing a number of weirs and restoring the river's meandering course. The floodplains and wetlands have also meant the return of many species including wading birds, amphibians and water insects.

Knepp is also now a haven for critically endangered birds like nightingales and turtle doves as well as birds of prey including peregrine falcons, buzzards, red kites and sparrowhawks. The birds of prey have increased due to the scrub habitat which supports large numbers of small mammals, birds and insects. 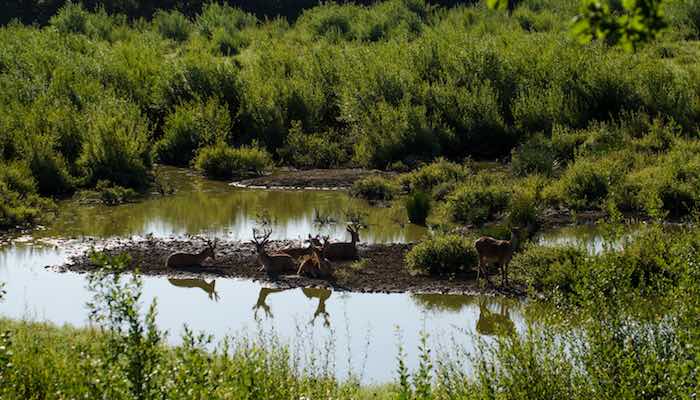 It is the sheer amount of life all around you that makes this project so wonderful. It is amazing how much work we humans put into surpressing nature but equally astonishing how quickly it comes back when we step aside, the estate is literally teeming with life.

I didn't see the owners, nor was I allowed access to their accounts but I presume the venture also makes a profit. There are no large predators so herbivore populations need to be controlled, this provides 'wild' meat for sale. One can also stay on site in various forms of accommodation including tents and shepherds huts. 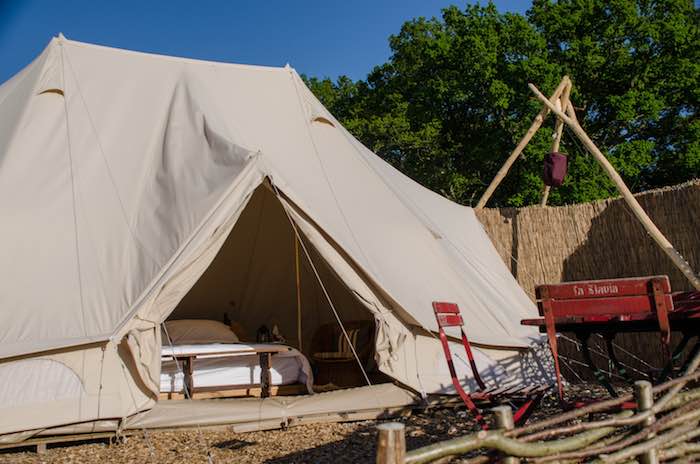 I accept that we don't all have 3,500 acre estates that we can turn over to projects like this. I also accept that Knepp is close to London and is in one of the most affluent parts of the UK; there are plenty wealthy folk around to pay for glamping or for guided safaris around the estate (it was pretty funny when we were leaving to see a Maserati struggling up the track to the farm).

Most of us do, however, have a garden and while few are very large we do have is a lot of them. This email currently goes out to around 15,000 people (and climbing, thank you!), if we take it that everyone has a small garden (a tiny 260 square meters) that gives us a combined estate of nearly 1000 acres.

Obviously we don't have the option to introduce deer, wolves or beavers to our shared estate but we can provide homes for smaller livestock like small mammals, birds and insects.

You may have read about the recent trend of introducing wildlife corridors in parks, farmland and on transport routes. The idea here is that we don't need an uninterrupted habitat to benefit wildlife; just like human habitation, wildlife needs homes, feeding stops and routes to get from A to B. 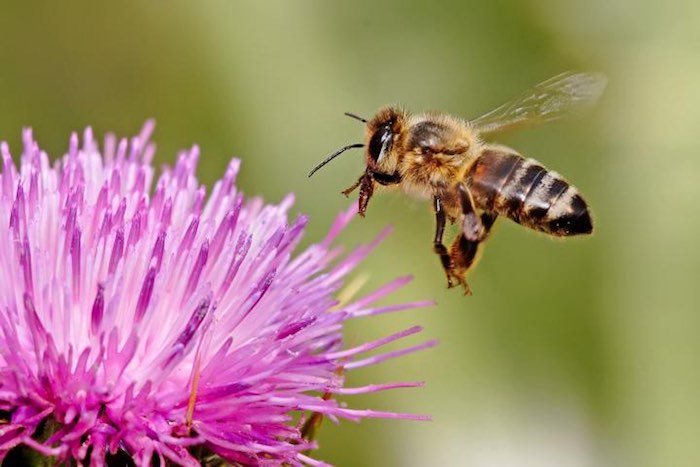 Yours and your neighbour's garden may be a key stepping stone on a national wildlife map that provides a permanent home or a feeding station for hungry guests. Just like the longhorn cattle, pigs, deer and buzzards who share the Knepp estate we can create a more varied habitat that includes us and wider range of animals, insects and birds.

I will be returning to covering vegetable growing next week but I will be writing more regularly on wildlife and increasing our wildlife supporting range of products. The selection below are some new items we have added to the site but we are also very excited about new pollinator friendly plants we're growing and planting plans we are working on. We look forward to launching our new 'wilding' section next season.

That's it for now, I'll be back with 'Friday Facts' at the end of the week. Thanks to the Knepp estate for the use of the beautiful photos above (I forgot to charge my phone before my visit so couldn't take any...)