The Evolution of the Wild Cabbage Plant

My recent bedtime reading has been 'The Blind Watchmaker' by evolutionary biologist Richard Dawkins and I am now suffering from lack of sleep. The book is fascinating. Many people take issue with Mr.Dawkins (especially those who believe in God, he is also author of 'The God Delusion') but he is a very entertaining read and explains a complex subject in a way that numbskulls like myself can more easily understand. He's also very funny.

Whatever your views on Richard Dawkin's religious beliefs (or lack of them) I think nearly everyone accepts that life on Earth evolved through the process of natural selection as detailed by Charles Darwin in 1859.  Over millions of years Species have evolved to suit their surroundings by very small and random changes in their genetic makeup. If an advantage was gained by a mutation, the offspring survived to pass on the new gene code; if the change was a disadvantage the progeny would be more likely to die and therefore the new trait would not be passed to a new generation. But you knew all that already. 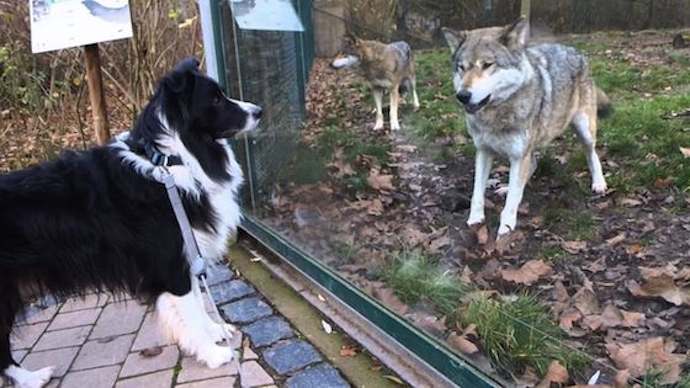 Natural and Artificial Selection Dogs are often given as examples of how quickly a species can evolve, the huge selection of pure and cross bred dogs we see today are all descendents of the grey wolf (above). The sheet of glass the collie and the wolf contemplate each other through basically represents 15,000 years of evolution. While the wild wolf has remained relatively unchanged (because we aren't involved) we have been responsible for shaping the domesticated wolf into the collie and all it's varied cousins.

Artificial selection works a lot faster than natural selection (in evolutionary terms 15,000 years is the blink of an eye) because the process is no longer random nor is it controlled by survival only. Offspring which exhibit a particular trait can be isolated by humans and used to breed the next generation. We are able to take an 'all or nothing' approach and only choose offspring that meet the desired criteria which gives much quicker results. 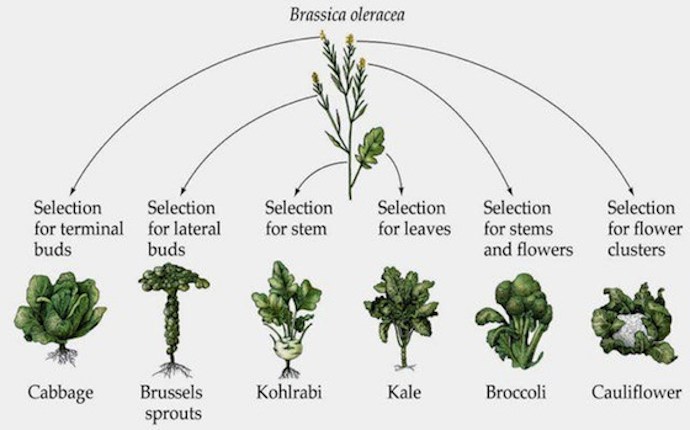 Brassica Oleracea The cabbage is arguably the dog of the plant world as our intervention has lead to wildly different cultivars which are hardly recognisable as members of the same species. 'Brassica Oleracea' or wild cabbage is the grey wolf of the brassica family and is the plant from which most of our Western cultivated brassicas come from. Asian brassicas like pak choi, Chinese cabbage and mustard leaves are descendants of a cousin of Oleracea, Brassica Rapa but that's another story.

It is believed that wild cabbage was cultivated several thousand years ago, it was certainly a well established garden vegetable in Greek and Roman times. The variations that we know so well today are due to artificial selection with either buds, stems or flowers as the desired trait as per the image above. 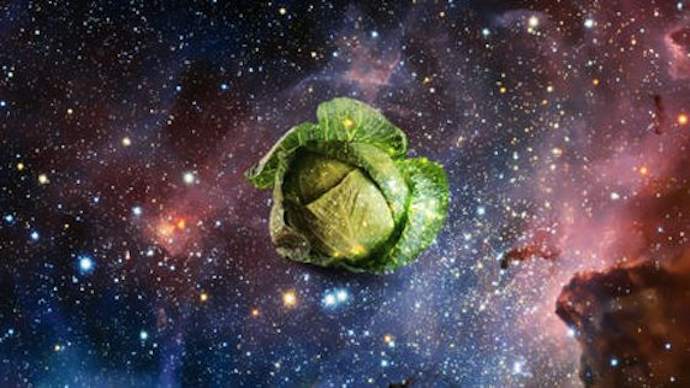 Cosmic Cabbage What I thought was incredible when reading 'The Blind Watchmaker' is this: if we know the end results we are looking for (cabbage, sprout, cauliflower etc...) it would only take 250 years to selectively breed the whole range again from scratch! Technically, if you moved to another planet and brought only wild cabbage your great grandchildren could still have sprouts with their Christmas dinner though it is debatable whether they would thank you for it.

Brassica Family Health Benefits Bringing Brassica Oleracea to your new planet wouldn't be a bad idea either as all members of this family are very good for you. My wife is a nutritional therapist meaning we get plenty of free advice at home on what we should or shouldn't be eating. The advice is a continuous stream so we have to tune in and out but I have managed to learn the following:

Vitamins Brassicas are rich in vitamins including vitamin C, B6, A, K and E.  Broccoli and Brussels Sprouts, for example, contain more vitamin C per serving than oranges. Vitamin K is important for helping absorbtion of vitamin D which is a common deficiency (especially in Winter) in Northern latitudes and effects our mood.

All brassicas are also high in magnesium which is another common deficiency in people who don't eat enough leafy greens. Magnesium is good for relaxing muscles and helping with sleep so has a calming effect on the body. Basically cabbages make you happy!

Fiber Brassicas are also high in fiber. In the same way that I would say mulching is the cornerstone of good vegetable growing my wife would say that eating enough fiber is the cornerstone of good health. We all know that we need fiber to keep our digestive process moving but it has other 'clearing' properties which are just as important. Fiber binds to cholesterol and removes it from the body, it also removes toxins and excess hormones to keep our system in balance. 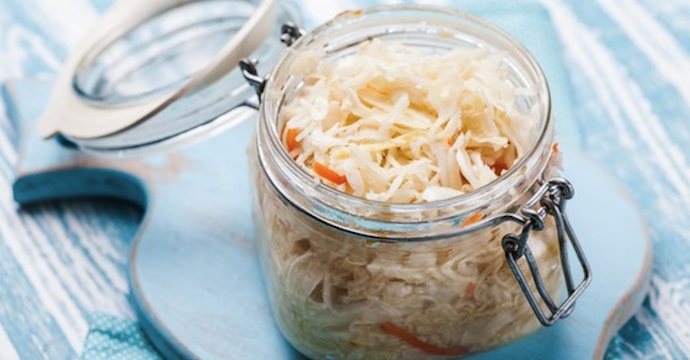 Fermented foods The subject of fermented food is a fascinating one which we'll have to go into another day but it is difficult to talk about cabbage without covering it. The advantage of fermentation is the good bacteria involved actually make food more nutritious by making minerals more available to the body and producing vitamins and enzymes that aid digestion. The good bacteria in the fermented produce are also probiotics which, when eaten, strengthen your immune system by adding to your own beneficial bacteria in the gut.

One of the most well known fermented foods in the West is Sauerkraut (above) which is a very easy to make fermented cabbage but you may also have come across Kimchi which is a more complex and spicy Asian version traditionally made from Chinese cabbage (a descendant of which brassica? Anyone? Anyone?). I did a course a while ago on how to make it which I have included in a separate article below. 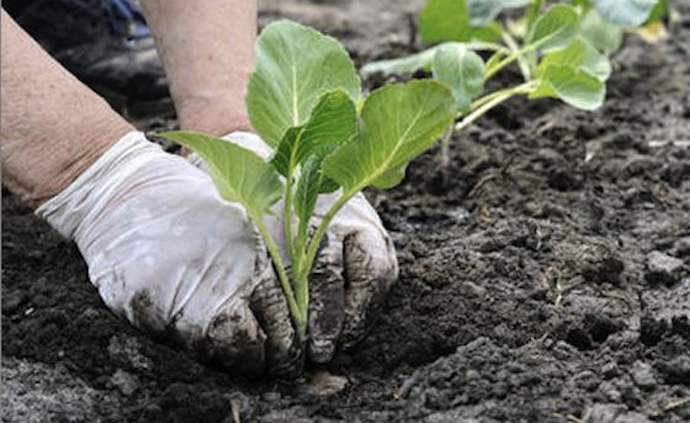 Growing brassicas In general I find members of the brassica family easy to grow provided you watch out for a couple of common pitfalls. We have plenty of detailed information on the blog and have videos on all the main ones but here's the 1,2,3 below anyway:

Feeding Brassicas are hungry plants, they put on a lot of bulk in a season and need a lot feed to be able to do this. This is also the reason why they need so much room as the roots will need a wide area to feed from. Your soil should be in good condition, ideally fed with plenty of well rotted manure before planting. You may also need to give large brassicas a boost mid season with a high nitrogen feed as they will need this to put on all that green, leafy growth. I find our ideal. 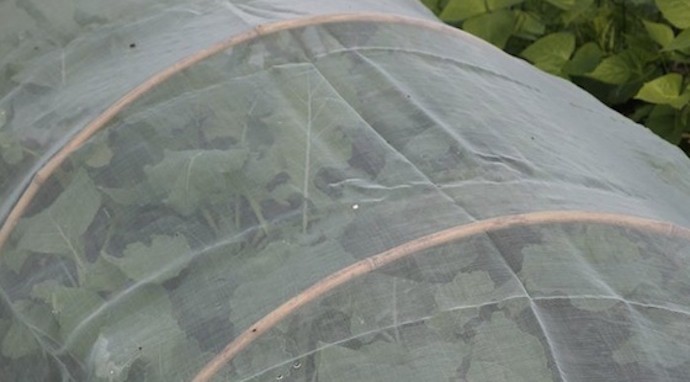 Common Pests If your soil is fertile you shouldn't have many problems. Once they get going, brassicas are tough and well able to deal with harsh weather. The things to look out for are cabbage root fly and cabbage white butterfly. You can easily solve both problems by covering your crop with Eviromesh attached to a frame.

If you don't like the look of the mesh you can use cabbage collars to protect from root fly and keep hosing off cabbage white caterpillars as you see them but this can be a lot of work.