Water is necessary to sustain all living life forms, we are made up of about 60% water while herbaceous plants like the vegetables growing in your garden contain between 80 and 95%. Plants use water to move nutrients around, to produce energy and in the case of non woody plants to create structure by packing cells with water to hold the plant up. In short if we don’t have a good water supply, we don’t have healthy plants. Of course water is a hot topic at present due to rising water charges so it makes sense to manage the resource to keep you garden and your wallet in good health. The good news is that you are more likely to harm or kill your plants by over rather than under watering so your vegetable garden may not need as much attention as you might think. 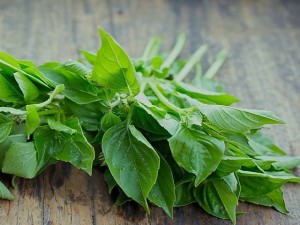 One example I regularly see is the unfortunate basil plant on the window sill being killed with kindness as every second person who comes to the sink decides to give it a drink. Better to let the plant wilt in between watering as basil comes from a warm climate originally and prefers to be kept a little on the dry side. It is important to judge your watering correctly in the fruit and vegetable patch especially early in the season. Over watering in February or March brings with it cold wet roots and diseases like damping off which can be the end of tender young seedlings before they have even got going. Watering young vegetable seedlings 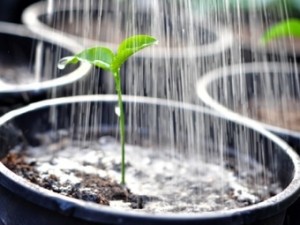 Water is essential for the first phase of seed germination, moisture penetrates the seed coat and causes the endosperm to swell. The swelling endosperm splits, and growth begins. If the seed compost mix is too wet and compacted drainage will be poor and the seeds will be deprived of oxygen and will most likely fail to germinate and rot. Your initial watering after sowing should be quite heavy, it can be done in two or three stages leaving about 30 minutes in between for the moisture to soak the compost and wet the shell of your newly sown seeds. The pots or trays can then be left alone for a few days until they dry out again before subsequent watering. It is also a good idea to leave your compost in the bag until ready for sowing otherwise it can dry out too much and be more difficult to wet properly. 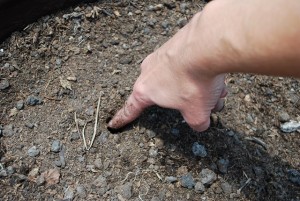 If you are growing vegetable seedlings undercover (in a poly tunnel or greenhouse) only water seedlings when they really need it and early in the day to avoid to avoid the leaves being wet for long periods as this can bring on fungal diseases or sun scorch. Always check moisture levels with your finger as the top layer of compost may feel dry but there is still plenty of moisture underneath. I like to encourage seedlings to work for their reward as, just like us, it makes them stronger. A slightly under watered plant will develop a deeper root system if it’s made to search for water while a pampered plants roots will be shallow and less able to withstand drought. 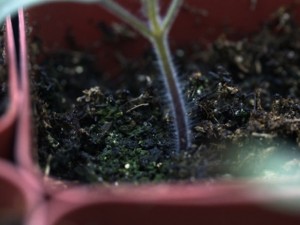 Sometimes there is no getting away from a little green moss growing on the surface of the compost in your seed or plug trays in early Spring. Too much is a sign of over watering and cold wet compost but don’t worry it can usually be scraped off trays to let air down to the roots saving your valuable seedlings. Some gardeners water from the base of the seed tray to avoid this but I find less frequent watering with a lance or fine spray is easier to manage. A fine rose attachment is important at this stage as a it is possible to wash compost and seed out of the seed trays with a heavier spray. A useful tip during cold weather is to store water in your greenhouse until ready for watering in barrels, tanks or watering cans to bring the temperature up a little, you will often see dunking tanks in old glasshouses built for this purpose. Watering in greenhouse and polytunnels In smallish polytunnels or glasshouses a watering can is usually sufficient, I quite like the slow pace as it gives me time to contemplate and check for upcoming jobs. Slow hand watering is also a good discipline as it forces me to look at the individual needs of each plant rather than evenly spraying a large area with a hose. 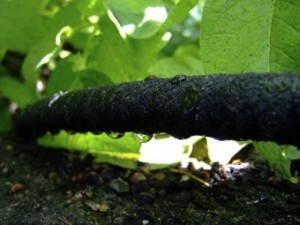 In a larger tunnel sunken tubes or pipes close to plants will speed up watering and get moisture deep down into the root area well away from the surface. Watering with capillary or soaker pipes is more efficient as less water is lost through evaporation and is also desirable in a tunnel as it waters the soil rather than foliage of plants which helps control fungal diseases. There is no need to water a poly tunnel every day, you are better off deep watering once or twice a week by leaving your irrigation on for up to 6 hours or giving a very heavy watering with a hose. Clearly you will need to tailor this depending on outside temperatures but less frequent deep watering makes sense because it saves you time and, as with seedlings, makes the plants develop their root systems. 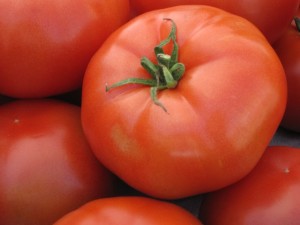 I find my tomatoes and basil grow faster if left a little on the dry side, no plant likes to be left in cold wet soil or compost but this is especially true for warm climate crops like tomatoes, peppers or cucumbers.  I sometimes let my basil wilt between watering which seems to help keep the plants vigourous and healthy. I am often asked how my tomatoes taste so sweet and my response is always less watering as they are maturing, sometimes I won’t water for up to two weeks. A miserly watering regime lowers moisture content and increases sugar concentration and also has the advantage of preventing splitting fruit which is so common late in the season. Mulches are especially useful in tunnels as they reduce evaporation from the soil, using well rotted compost, straw or even cardboard will dramatically reduce your watering bill. 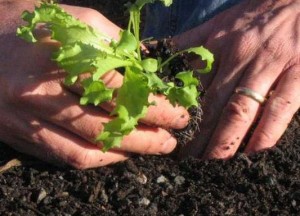 Planting out seedlings. When planting out seedling plants it is far more beneficial to water seedlings the day before planting out rather than after you have put them in the ground. The seedling plug should be very moist for the plant to survive until it gets roots down into garden soil. There is no point planting dry plugs and then trying to water them in as the compost won’t get properly saturated. Once a seedling gets established its best left alone unless you have a long drought lasting more than 2 weeks and you are forced to water outdoor crops. Keep an eye on the weather forecast, there is no point in wasting valuable time and water irrigating the garden when it is likely to rain the next day. 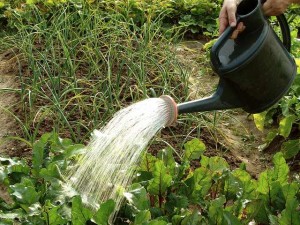 Outdoor watering. I very very seldom water fruit and vegetables outdoors, once they have germinated safely or have been planted out they are best left alone. The same applies to maturing vegetables as seedlings: treat ‘em mean! Letting vegetables work harder for moisture encourages them to send roots deeper and deeper into soil and results in a much stronger plant. Also remember, once you start watering you must keep it up as you are making your plants more dependent on you by spoiling them (I understand this is also the case with children!), your vegetables will have puny little roots in the top layers of soil which can’t support the plant in dry conditions. If you do need to water in an exceptionally dry year practice infrequent heavy and deep watering for the same reason. The last time I watered outdoor crops was on a 2 acre vegetable plot with very sandy soil on Inisnmor in the Aran islands during the warm summer of  1995, very time consuming work only done in an emergency. 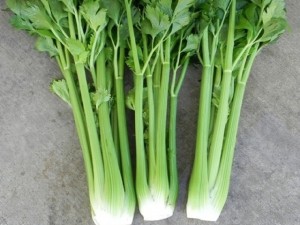 General watering tips. Celery, celeriac, leeks, squash and parsnips need ample amounts of water, some garden soils (very sandy) are just not suitable for such crops. Most herbs, however, enjoy slightly dryish conditions, so sandy soils are ideal. Plan your garden around your soil to avoid over using resources. Depending on your soil type as a general rule the less drainage the higher the drills, ridges, or raised beds you need to make. If you grow on dryer soils use low beds to gather moisture as I did while growing in very sandy soil on the Aran Islands. Sandy soils dry out quicker and are more likely to need watering in a prolonged period of dry weather while clay or loamy soils hold their moisture for longer. 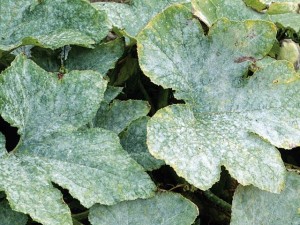 Never water the leaves of courgettes, the number one cause of powdery mildew is dry roots and wet leaves. An even supply of water gives the best crops especially with root vegetables where a check in growth caused by drought can cause them to become woody. A period of drought followed by heavy rainfall will quickly swell vegetables like carrots or tomatoes causing them to split. Lack of moisture in celery makes it stringy and bitter while dry lettuce can also be bitter and is likely to run to seed. Collecting rainwater. Clearly there is no point in paying for water when is falls from the sky for free! Harvesting the rain water from your roof via a water butt system is a very worthwhile investment particularly if you have a poly tunnel or greenhouse where watering is inevitable. If you are using water from a water butt try to use it often to prevent water sitting for long period and becoming stagnant as it can lead to the spread fungal diseases.