Common garden weeds are a large part of our gardens, and need to be identified before they manage to sow seed and multiply. If you keep a strict and thorough weeding regime, this particular chore will get much easier as the years go by. The 'no dig' gardening method can also be beneficial. 'No dig' means adding compost and manure to the surface of your garden rather than digging it in. As a knock-on effect it will reduce the amount of dormant weed seeds brought to the surface to germinate.

Some of the most difficult weeds to get rid of are the annual varieties, as they are prolific seeders and grow so quickly. I have included the most common varieties below including photos and descriptions. In general I have shown them in their more immature state, as this is the point where you will need to recognize them and get rid of them. 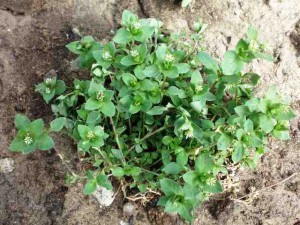 Chickweed Chickweed grows to about 5-7 cm high. It has a vigorous spreading habit, small white flowers and an extensive root system.

Chickweed is probably the most common annual garden weed. Seeds germinate easily in damp soil in Spring and Autumn, or throughout the Summer in a wet year.

Chickweed sets seeds quickly - so remove any seedlings you see by hoeing in dry weather. Pull by hand if the soil is too damp to hoe. Each plant produces 2,500 to 15,000 seeds, which ripen five to seven weeks after the parent plant germinates. Plants are hardy, so will survive mild Winters. This means it can take off quickly and set seed in Spring before you notice! 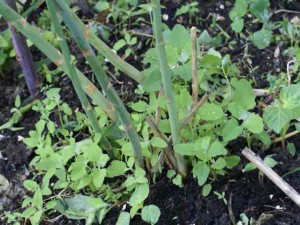 Fat Hen Fat Hen grows to 27cm high, with broad leaves and small indistinct green/white flowers. Related to tree spinach, fat hen was eaten as a vegetable in neolithic times and is rich in vitamin C.

Fat Hen is found on rich soil so is commonly found in the vegetable garden. Seedlings germinate in dense patches. They look harmless at first but quickly grow into large plants if allowed to remain.

Hoeing seedlings when small is the easiest method of control. Usually you will have to do this twice if large numbers of seedlings have germinated. Seeds persist for a long time in the soil and will germinate readily even after 20 years when brought to the surface. 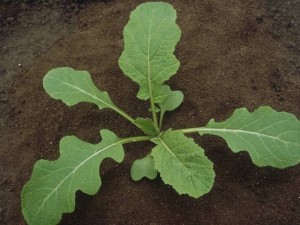 Charlock Charlock is a commonly seen weed when ground is disturbed. It grows up to 60cm high with yellow flowers. You will often see large patches of charlock, which can easily be confused with the oilseed rape due to its sea of yellow flowers.

Seeds are set in 8-10 weeks and will germinate in nearly all seasons, especially in Spring. Charlock is a fast growing weed of the brassica family and is easy to hoe when young. It is also easy to pull out if allowed to grow into a larger plant. As with all annuals, remove before it can set seed or it will become a much bigger problem. Remember, as it is a brassica it can harbour pests and disease from that family - so it needs to be kept out of other crop rotations. 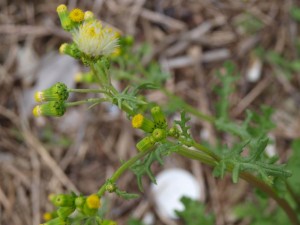 Groundsel sets seed within 4-6 weeks so you need to be vigilant. One small plant will set hundreds of seeds dispersed over a wide area by the wind. Seeds will germinate throughout the year - apart from mid winter - and will quickly establish on fertile soil.

If soil is dry or shady, the plants will set seed when young - so keep an eye out under shade plants like parsnips, courgettes or cabbage. Remember to remove any flower heads after hoeing, as they will still make viable seed even if left uprooted on the soil. 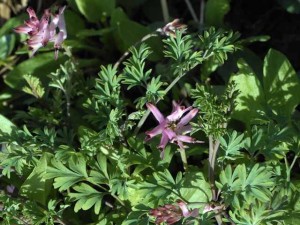 Fumitory likes undisturbed ground so will be more common on the verges of your lawn or garden, where the delicate pink flowers are very attractive. The plant is easy to control by hoeing. While its seeds remain viable for a long period of time, it is not considered a particularly invasive weed. 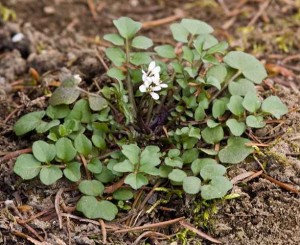 Seeds are set in 4-6 weeks. An explosive seed mechanism means that seeds can be dispersed up to 1m (3ft) away, or considerably further if carried by the wind. The diminutive size of the plant also makes it easy to miss, allowing it to scatter its seeds unnoticed.

Bittercress is a weed of cool, moist conditions, so improving drainage will help control it. It is also commonly seen growing on the surface of compost in nursery plants, and can be unwittingly introduced to gardens from container-grown plants. 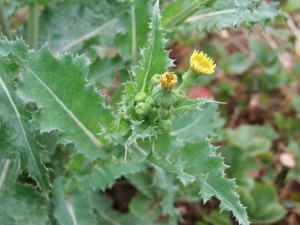 Prickly Milk (Sow) Thistle. Can grow up to 90cm high but is often smaller, with pale yellow flowers.

Seeds are set in as little as four weeks if the plant is in a dry and shaded position. Sow thistle needs to be spotted and removed early, as it has a strong tap root. This makes it difficult to eradicate when established, and it will set hundreds of seeds.

Sow thistle will germinate in a wide variety of conditions throughout the year, even over winter in mild years. There is also a similar perennial weed sow thistle, whose fleshy roots are quick to colonise - but it can be easily removed as seedlings to keep it under control. 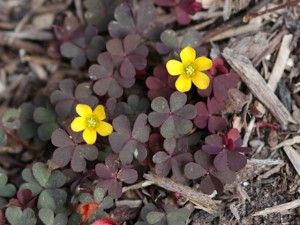 Oxalis Oxalis only grows about 5cm high, but is a very prolific seeder. I had some in my tunnel a coupe of years ago and quite liked the look of it, so let it be. Big mistake, as it's now all over the place.

Seeds are dropped from barely visible pods before you even notice its presence. You need to keep your eye out for this one, because once present it will multiply very quickly. Oxalis is often an unwanted passenger in nursery plant pots. 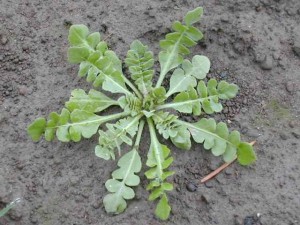 Shepherds purse Shepherd's purse consists of a cluster of serrated leaves, with a long slender flower head 5-10cm tall. Before they produce their flower stem, Shepherd's purse can be easily confused with a dandelion leaf.

Seeds are set in 6-8 weeks in green heart-shaped seed pods (or purses, hence the name). Once the flower stalk has been produced, the plant will have grown a deep tap root which can be difficult to remove. Like most weeds, it is a good idea to hoe young seedlings early. 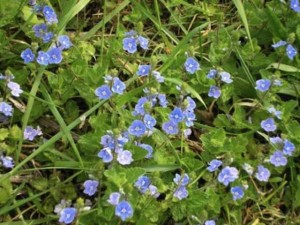 I have a mat of speedwell under a beech tree on my lawn and am quite happy to leave it there. Its low growth habit means it survives the mower.

Speedwell sets seeds in 4-6 weeks, but is easy to control by hoeing or pulling out when small. Plants become more difficult to get rid of if allowed to grow into larger clumps - but this is unlikely in a busy vegetable garden.