I thought I'd quickly try to explain the difference between open pollinated and F1 seeds this week as I was asked about it twice over the last few days. There seems to be some confusion between F1 and genetically modified seeds as well the difference between open pollinated and heirloom varieties. Anyway, I don't purport to be an expert in these matters but hopefully this piece will shed some light on the subject, I hope you find it helpful. F1 Varieties: An F1 hybrid is a cross between two parent varieties chosen for particular desirable characteristics (size, colour, shelf life etc....). This cross pollination is exactly the same thing as happens in nature but in the case of F1 plants it is done under tightly controlled conditions to ensure no other pollen slips into the mix. Much of the work in creating an F1 variety is breeding true stains of the parent types, this is why F1's can take years to produce and are relatively expensive seeds. The resulting seed is the first cross between the two pure bred parent varieties and contains their characteristics but also tends to be stronger due to a phenomenon caller 'hybrid vigour'. 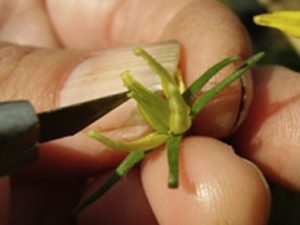 Hybrid vigour is the increase in certain characteristics e.g. size, growth rate, fertility, and yield of a hybrid plant over those of its parents. The first-generation offspring generally show amplified versions of the desired characteristics of both parents. This vigour may decrease, however, if the hybrids are mated together; so the parental lines must be maintained and crossed for each new crop. The snag with seed produced by F1 plants is that new plants grown from this seed will not be true to the F1 variety they came from. This is a bit complicated to go into here but is basically because there are a mix of different dominant and recessive genes for particular traits and you don't know what is going to come out in the mix. Parents with a  mix of dominant and recessive genes are referred to as heterozygous. 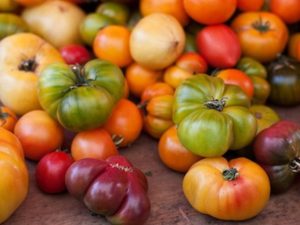 Heirloom and Open Pollinated Varieties: Heirloom and open pollinated varieties are varieties with genes that are all the same or homozygous. Homozygous means the genes of the parents match which results in offspring that are copies of the parent plant. An heirloom variety is just an open pollinated tomato which has a lineage that can be reliably traced back for a number of generations; it is a case of historical record rather than any difference in the genetics of the tomato. Seeds from open pollinated plants can be saved and grown the following year and will produce plants broadly the same as the parent plant. I say broadly because if pollen from another variety is introduced the new plants may have some of the characteristics of the new parent. Saving and growing from open pollinated seed is both fun and important as varieties will survive which might otherwise die out. Also, if the large seed suppliers control seed stocks we are at their mercy with both price and the choice of varieties. 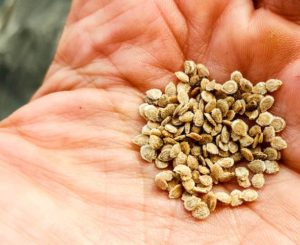 Open Pollinated or F1? Open pollinated varieties are more genetically diverse so will thrive in a wider range of growing conditions and will, over time, become more suited to growing in your garden. Flavour in open pollinated varieties can also be better because F1 varieties tend to be grown for commercial growers where traits like uniform ripening and long shelf life may be chosen over taste. F1 seeds are, however, an excellent solution for many crops. They have been developed to produce vigourous, uniform, high yielding plants which they do very well. Personally I don't bother with calabrese, cauliflower or Brussels which aren't F1's as the results are so much better but you will find many open pollinated varieties of tomatoes, for example, have better flavour. Choosing seeds is all about finding the varieties that work best for your garden and your palate with a mix of seed types being my recommended choice.